*These authors contributed equally to this work

Cerebral aneurysms result from an abnormal focal dilation of an artery wall in the brain and can vary in size from 0.5 mm to greater than 25 mm(1,2). While most cerebral aneurysms are silent and may be incidentally identified on imaging, aneurysmal rupture is commonly associated with subarachnoid hemorrhage (SAH), leading to a high morbidity and mortality rate(1,2).

Despite the current uncertainties surrounding the precise mechanisms by which cerebral aneurysms develop, grow, and rupture, several factors have been associated with the formation of cerebral aneurysms(3,4). Some include hypertension, age over 40, smoking, trauma to the blood vessels, and a family history of aneurysms(3).

Posterior communicating artery (PCOM) aneurysms are the second most common aneurysms overall, accounting for 25% of all aneurysms and representing 50% of all internal carotid artery (ICA) aneurysms(5). We report a patient with a ruptured left PCOM aneurysm presenting with a left subarachnoid hemorrhage.

A 52-year-old woman was presented with a sudden onset of severe headache, vomiting, nuchal rigidity, and decreased conscious level. She was transported to our hospital for management of subarachnoid haemorrhage (SAH). On admission, the patient was semi-comatose with anisocoric pupils, and a Glasgow Coma Scale (GCS) score of 5. She had no past medical history of trauma, hypertension, diabetes or other diseases.

Based on the patient’s clinical presentation, the following would be included in the list of differential diagnoses(1):

The first-line diagnostic investigations to be ordered included(6): 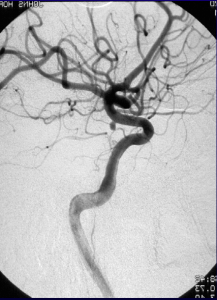 Figure 2. Digital subtraction angiography was performed which showcases an aneurysm originating from the PCOM

Endovascular detachable coil embolization was performed under intravenous anesthesia. The microcatheter was navigated from the femoral artery to the left PCOM aneurysm and a microcatheter tip was positioned in the aneurysm under fluoroscopic guidance. Coil position within the aneurysm and the patency of the parent vessel were confirmed angiographically prior to every coil detachment. The left PCOM aneurysm was successfully occluded (Figure 3). Figure 3. Digital subtraction angiography was performed following endovascular coiling of the PCOM aneurysm showing complete occlusion of the aneurysm and exclusion from circulation as well as good patency of the PCOM

One week later, follow-up CT and DSA examination was performed and revealed no abnormality in the brain parenchyma and good patency of the PCOM. The patient’s postoperative course was uneventful, and she was discharged home on the 14th postoperative day. The patient was neurologically intact at discharge.

What if the patient in this case was 35 years old instead? How would your treatment strategy change?

Surgical clipping is done under general anesthesia and requires open surgery(7). The brain is gently retracted to visualize the aneurysm. A small clip is placed across the neck of the aneurysm to block the blood flow into it. Clips are made of titanium and remain on the artery permanently.

In this situation, the preferred method of treatment would be surgical clipping(9). The less invasive nature of coiling is likely to be favored in patients who are older, are in poor health, have serious medical conditions, or have aneurysms in certain locations. In patients younger than 40 years of age, the difference in the safety between coiling versus clipping is small. Therefore, the better long-term protection from bleeding may give patients with clipped aneurysms an advantage in life expectancy.

What imaging technique should be used to assess any possible residual perfusion of the aneurysm?

Digital subtraction catheter angiography remains the gold standard for diagnosis and characterization of vascular abnormalities and in many centers, even if the causative lesion is identified on MRA or CTA and it is thought to require surgical management, a catheter study is carried out(10).

The benefit of DSA over MRA or CTA is two-fold:

A non-contrast enhanced CT scan is commonly used as the first-line imaging modality for evaluating subarachnoid hemorrhage as it is rapid, inexpensive, and widely available.

What are the characteristics of aneurysmal subarachnoid hemorrhage (SAH)?

For example, aneurysms at the anterior communicating artery, the most common site of aneurysmal SAH (34%), have the following characteristics(11):

What is the progression of aneurysmal rupture?

What typically accompanies the SAH is diffuse or focal forms of vasospasm that may lead to ischemia and infarction11.

Recent animal data suggest therapeutic benefit of nitrite infusions to enhance cerebral perfusion in the setting of aneurysmal SAH11. This delayed complication of vasospasm is of unclear pathogenesis but most likely is due to the presence of blood and the formation of multiple substances in the subarachnoid space. Spontaneous thrombosis of an aneurysm and subsequent recurrence have been reported in a few cases.

What are possible complications of ruptured cerebral aneurysms in general?

Answer: d) All of the above.

Some of the other complications of ruptured cerebral aneurysms include11: