Right ventricular hypertrophy is suggested by elevation of the cardiac apex from the diaphragm on this PA projection of a patient with rheumatic heart disease. The lateral view supports the diagnosis by demonstrating loss of the retrosternal airspace and increased contact of the right ventricle against the sternum. Also noted in this patient are mitral valve calcification, evidence of left atrial and pulmonary artery enlargement, and evidence of chronic congestive heart failure. 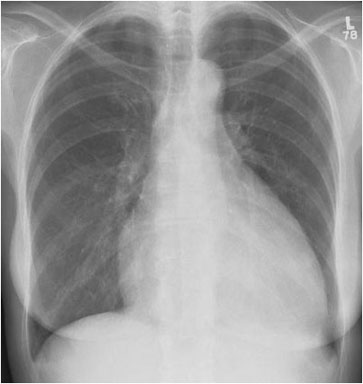 If the pulmonary edema is due to heart failure or fluid overload, you may also see cardiomegaly and distension of the pulmonary veins, particularly in the upper lung fields. This latter phenomenon is referred to as vascular redistribution and can be seen in normal supine radiographs of the chest. As pulmonary edema progresses, fluid begins to collect in alveoli, causing diffuse airspace disease often in a “bat-wing” or “butterfly” pattern, tending to spare the outermost lung fields. Pleural effusion may be a feature of pulmonary edema.

Evidence of a pericardial effusion can be as follows:
a) a globular heart
b) loss of the indentations of the left mediastinal border
c) separation of peri- and epicardial fat pads on lateral film.
The appearance is very similar to a dilated cardiomyopathy, therefore you will need a CT scan to distinguish them. 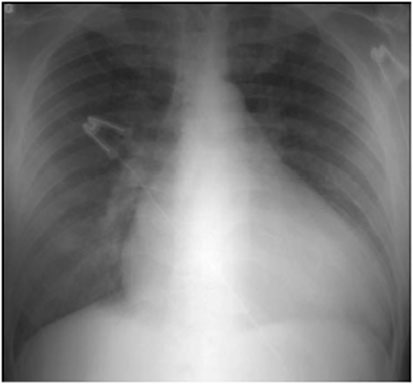 PA film of a patient with a large pericardial effusion. Note the abnormal (>0.5) cardiothoracic ratio and classic “globular” shape to the heart. Other features of pericardial effusion (not seen) include a loss of the indentations on the left mediastinal border and, on the lateral film, separation of the peri- and epicardial fat pads. 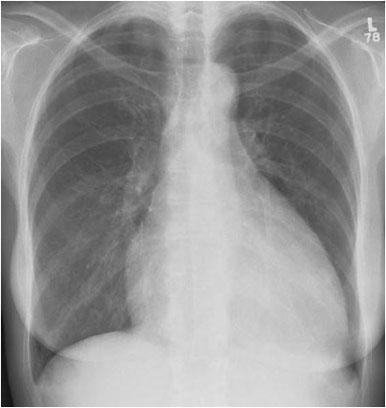 A prosthetic mitral valve is noted on PA and lateral radiographs of a patient with rheumatic heart disease. Sternal wires are most likely from the valve replacement surgery. There is also evidence of consolidation in the right lower lobe. 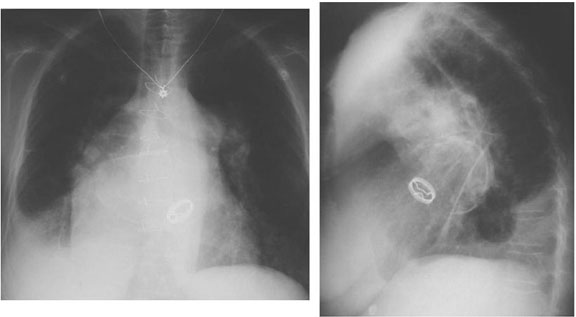 Note the calcified mitral valve on this lateral projection of a patient with rheumatic heart disease. 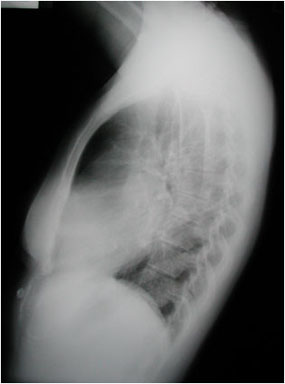 Evidence of an enlarged left ventricle can be as follows:
a) displacement of cardiac apex inferiorly and posteriorly
b) boot shaped heart
c) Rigler’s sign (on the lateral film, from the junction of IVC and heart at the level of the diaphragm, measure 1.8 cm posteriorly and then 1.8 cm superiorly. If the cardiac shadow extends beyond this point then LV enlargement is suggested 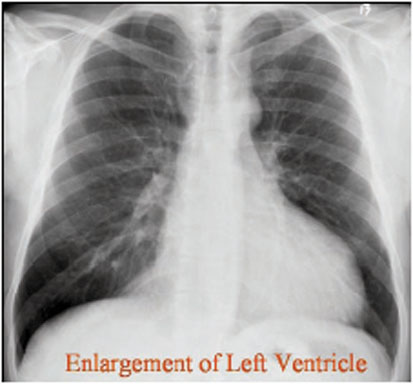 This patient had rheumatic heart disease with mitral stenosis. Left atrial enlargement is suggested by the “double contour” sign, (i.e. 2 right heart borders), and the “ballerina” sign, an increase in the angle between the left and right main bronchi (also known as a “splayed carina”). Other signs of left atrial enlargement (not well seen here) include a straightening of the left heart border and elevation of the left main bronchus (specifically the upper lobe bronchus on the left lateral film), with a distance between this bronchus and the “double” heart border >7 cm. There is also cardiomegaly (cardiothoracic ratio >0.5), suggesting ventricular failure. Loss of angle between left pulmonary artery and left heart border also suggests ventricular enlargement. Prominent vasculature in bilateral lung fields, with cephalization (more prominent towards the upper fields), suggests pulmonary venous congestion, interstitial edema, and pulmonary hypertension. Mitral valve calcification is difficult to appreciate and better seen with fluoroscopy. 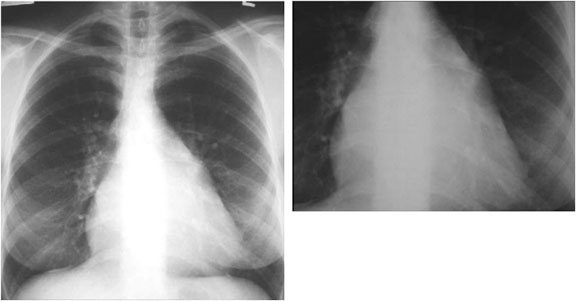 Advanced atherosclerotic calcification of the coronary arteries is noted in this lateral radiograph. 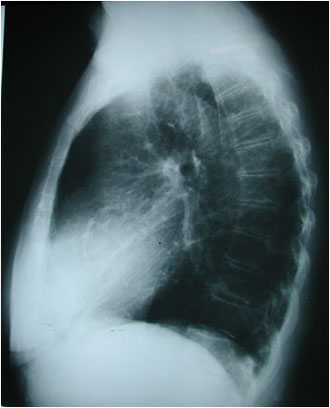 Calcification of the aortic valve (arrow) is best noted on the lateral projection in this elderly patient. 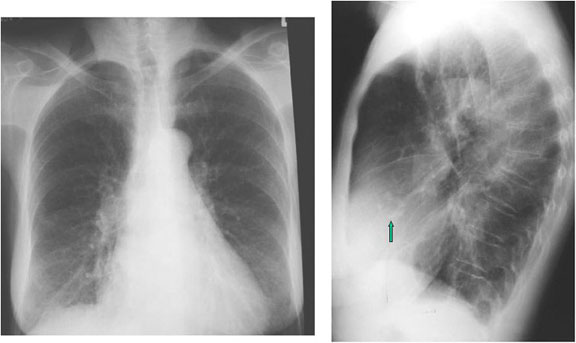