The bowel normally contains variable amounts of air or gas (black). Only the inner aspect of the bowel that contains air can be visualized, while the outer limits of the bowel wall are impossible to see (normally).
The large bowel (outlined in the left image) is located peripherally in the abdomen, resembling a “picture frame”. It has a larger diameter than the small bowel and contains mucosal folds, called haustra, that do not completely cross the width of the bowel. The small bowel (outlined in the right image) is located centrally in the abdomen, has a smaller diameter and has folds, called valvulae conniventes (or plicae circulares), that traverse the entire width of the bowel. [Courtesy of Dr. N. Jaffer] 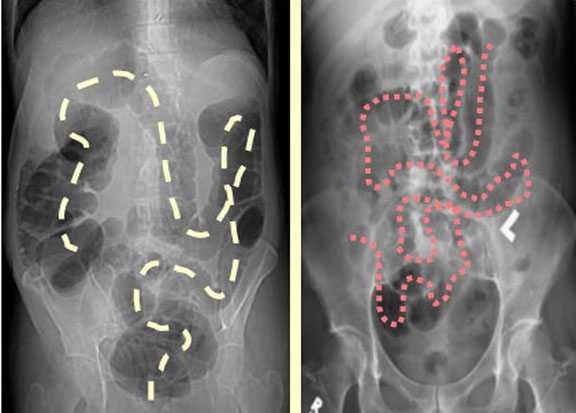